Naruto is best known as the protagonist and titular character of Masashi Kishimoto's Naruto.

In the Super Smash Bros series, he is often teamed up with the likes of Ichigo Kurosaki, Sakura Haruno, or Meta Knight in order to defeat the likes of Grimmjow Jaegerjaques and Deidara. After that, Naruto can betray Ichigo and fight him. 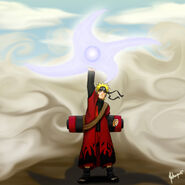